9 Interesting Facts About Billy the Kid

Billy the Kid was only an active criminal for around five years, but he made quite the impact on the American frontier. Henry McCarty, who we all know by Billy the Kid, was born on November 23rd, 1859 in New York City. After entering a life of crime, Billy the Kid was eventually shot down by a sheriff in New Mexico. Billy the Kid has become an American legend, so today let’s check out 9 interesting facts about this ruthless criminal. 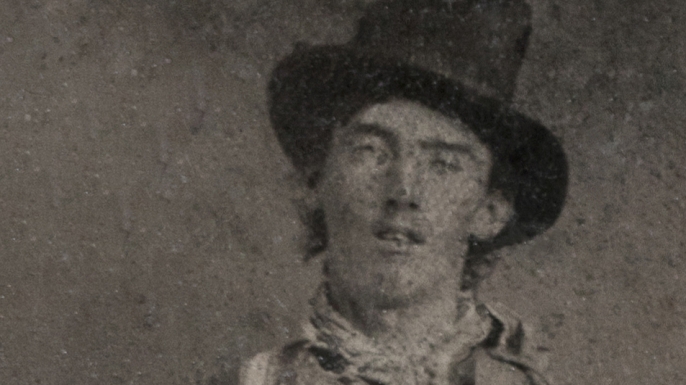 With a criminal as notorious as Billy the Kid, you probably imagined his life of crime beginning with something big. However, Billy’s first encounter with the law happened in 1875, when he helped a man by the name of “Sombrero Jack” steal clothing. This may not be the rough life of crime we’ve all imagined for such a notorious criminal, but Billy the Kid was in fact arrested for this crime. He was turned in by his landlord for what was considered a minor crime. Instead of facing his punishment, Billy the Kid decided that to escape the jailhouse. So Billy escaped the jailhouse by making his way out through the chimney. Although this crime seems petty, this was the beginning of a new life for Billy. He fled town and began working as a roving ranch hand, gang member, and a gambler. In 1877, he committed his first murder after he shot a man during an argument.

2. He Was Never a Bank Robber

Unlike many of his notorious counterparts, Billy the Kid never made a living off of bank or train robbing. Every now and then, Billy would steal horse, but never once in his criminal career did he hold up a bank. Billy the Kid’s true enterprise involved him rustling cattle in New Mexico.

3. Billy the Kid Was an Orphan

Billy was born in the Irish slums in New York City and raised by a single mother. As a young boy, Billy moved from New York to Wichita, Kansas in the early 1870’s and then eventually he moved to New Mexico. He adapted to his surroundings quickly and began speaking Spanish fluently. Unfortunately, Billy’s mother became very ill and in 1874 she died of tuberculosis. At the age of 14 Billy was left alone in this world. Over the next five years, Billy was placed in and out of foster homes and various boardinghouses. It wasn’t long until he fell into a tough crowd and started his life of crime.

4. He Didn’t Shy Away from Feuds

In 1878, Billy the Kid finally earned his reputation as a gunslinger. During this time, a frontier war began between a rancher named John Tunstall and two Irish tycoons by the names of James Dolan and Lawrence Murphy. The Irish tycoons had been running a monopoly on dry goods and cattle trades within Lincoln County for quite some time. Once they began to threaten Tunstall’s entire operation, Tunstall decided to fight back. John Tunstall hired Billy the Kid along with a few other gunmen to watch over his property. Unfortunately, in February 1878, John Tunstall was murdered by the local, Sheriff William Brady. Brady had been a proud supporter of the Irish tycoons and “The House” for a long time.

After Tunstall’s death, tension began to rise even more. Billy the Kid and Tunstall’s other employees began their very own vigilante group known as “The Regulators.” They swore that they’d get revenge for Tunstall’s death. What is now known as the “Lincoln County War” broke out after Billy the Kid and his cohorts murdered Sheriff William Brady. Over the next few months the Regulators and The House were in a constant battle. Finally in July of 1878, the war came to an end after a firefight that lasted five days.

This war gave Billy the Kid his reputation for being one of the West’s most talented gunslingers. Unfortunately, his decision to murder Sheriff William Brady put Billy in the spotlight. Billy the Kid spent the rest of his life on run.

5. His Escape from Prison

After being on the run for a few years, someone finally tracked the notorious Billy the Kid down. Sheriff Pat Garret found Billy hiding out in Stinking Springs, New Mexico. After being captured, Billy’s execution had been scheduled for April 28th, 1881. However, this didn’t stop Billy from trying to escape. While taking a trip to the outhouse, Billy managed to slip out of his handcuffs and ambush the guard who was on duty. Billy then stole his pistol and shot the man to death. Billy the Kid proceeded to arm himself with a variety of weapons and began to gun down the jailhouse guards. Finally, Billy took over the courthouse and began to collect even more weapons. He then freed himself from his shackles and fled town on horseback.

Billy the Kid was known to draw his weapon whenever he was provoked. Between 1877 and 1881, Billy was guilty of killing around nine men, four of those men he singlehandedly murdered. One particular story that stands out among the rest happened in January 1880. In a New Mexico saloon, a drunk by the name of Joe Grant began harassing people and he even threatened to kill someone. Billy the Kid knew this man was trouble and proceeded to approach the man. According to the story, Billy remarked to Grant, “That’s a mighty nice looking six shooter you got.” Then taking Grant’s gun away from him, Billy spun the cylinder in order to ensure that the next shot would be empty. As the evening went on, Grant stuck to his word and in an attempt to kill Billy, he pulled his weapon out and tried to shoot. The gun obviously didn’t fire a bullet, and Billy then drew his own gun and shot Joe Grant.

Once Billy escaped death row, he spent the next few months hiding out in Fort Sumner, New Mexico. However, Billy wasn’t very good at keeping quiet. It wasn’t long until Sheriff Pat Garrett made his way to Fort Sumner. On July 14th, 1881, Garrett showed up at Peter Maxwell’s home and proceeded to question him about Billy the Kid. As soon as Maxwell had been notified of Garrett’s arrival, Billy the Kid showed up to the house. Noticing that Maxwell wasn’t alone, Billy armed himself and began shouting “Who’s that?” in Spanish. Sheriff Garrett immediately recognized Billy’s voice and didn’t hesitate. He drew his gun and fired two shots in the direction of the voice. Sheriff Pat Garrett’s bullet hit Billy the kid in the heart and killed him instantly. Billy the Kid was only 21 years old at the time of his death.

8. He’s Been Turned Into a Star

Well, Billy himself isn’t quite a star. However, the legend of Billy the Kid continued to grow over the years. After his death, his name was resurrected in TV shows, movies, and even novels. In 1911, a silent film titled “Billy the Kid,” made it’s way to the big screen and was shown over 50 times. Popular actors such as Paul Newman, Val Kilmer, Emilio Estevez, and Roy Rogers have portrayed the infamous criminal.

9. His Death has Become a Myth

As soon as Billy’s death became old news, rumors about the legitimacy of his death began to circulate. Some believed that Garrett had killed the wrong person. Other believe that Garrett even helped fake Billy’s death. This rumor became so popular that an old man known as “Brushy Bill” Roberts claimed that he was the real Billy the Kid. Many people discredited this account after his family records were reveled and his birthdate was made known. Some have even theorized that Billy lived under the alias “John Miller.” Despite the rumors, there have been multiple historical records that state that Billy the Kid’s body was actually identified by several authorities.