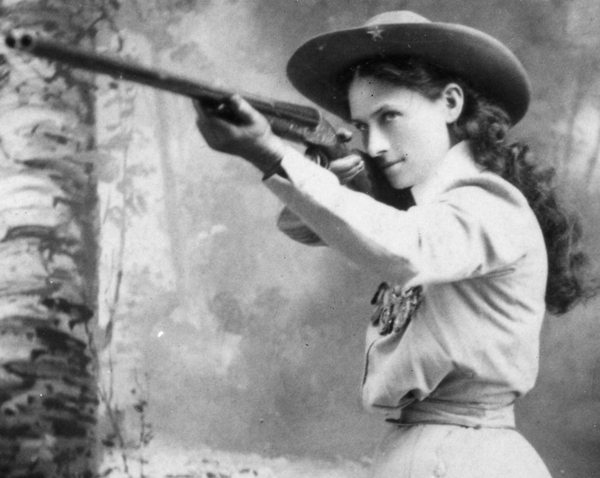 Last time on History’s Badasses, we talked about Oda Nobunaga, the young man who singlehandedly united over half of feudal Japan “under one sword”. This time, we’re taking a closer look at the life of Annie Oakley, the famous markswoman of the American Wild West. As a child, she would hone her marksmanship in order to pay her mother’s mortgage. As an adult, she would marry another marksman and turn her incredible talent into a living and tour for years with the famous Buffalo Bill’s Wild West Show, renowned for her unparalleled skill with a gun. 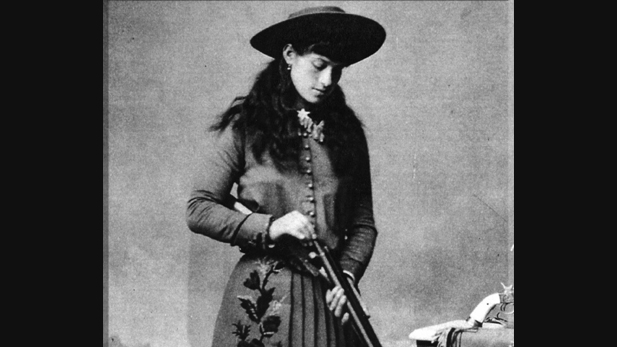 “My mother…was perfectly horrified when I began shooting and tried to keep me in school, but I would run away and go quail shooting in the woods or trim my dresses with wreaths of wildflowers.” – Annie Oakley.

Annie Oakley was born Phoebe Ann Moses on August 13, 1860, in Darke County Ohio. Both her father and her stepfather died when she was a child, and she was sent to live at the Darke County Infirmary, where she got an education while helping to care for orphaned children. In her early teens, she moved back to live with her mother, who had remarried, and began hunting with the family rifle in order to sell meat to the local grocery store to help with the family’s tight finances.

It was in her early teens, practicing on small game, that Annie would refine her marksmanship skills. She became so good with her rifle that she earned enough money to pay off her mother’s $200 mortgage. She was just fifteen.

In 1875, she entered a shooting competition on Thanksgiving. She beat everyone, including a man named Frank E. Butler – another marksman. Frank was absolutely smitten. The following year, when Annie was sixteen, she married Frank and began traveling with him while he worked as a showman.

Star of the Wild West 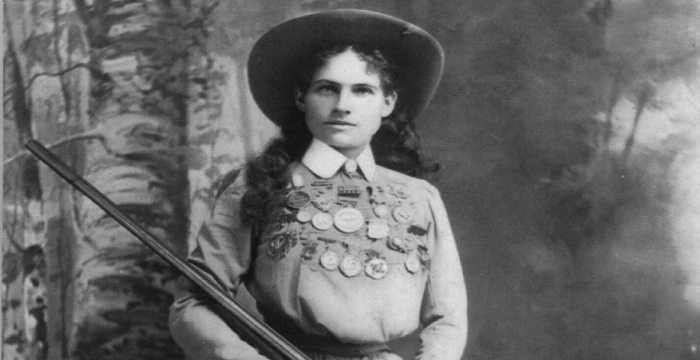 “A crowned queen was never treated with more reverence than I was by those whole-souled western boys…And for seventeen long years I was just their little sister, sharing both their news of joy and sorrow from home.” – Annie Oakley.

In 1882, Frank’s partner fell ill and was unable to perform with him. Annie took his place, holding objects for him to shoot. The two of them began to work professionally together after that.

Two years later, she met Native-American leader Sitting Bull. Reportedly, he was so impressed with Annie that he gave her the name “Little Sure Shot”. Through Sitting Bull, Annie and Frank then joined Buffalo Bill’s Wild West Show and began touring in 1885.

For the first time, it was Annie, and not her husband, who took the limelight. Frank worked as her manager, assisting her in her displays of marksmanship, and the audience was absolutely floored. Annie could do all sorts of things, like shoot the end of a cigarette in her husband’s lips, or shoot holes in cards through into the air before they landed. She could even shoot the thin side of a playing card.

Annie traveled to England with the show and entertained Queen Victoria herself. When performing for Kaiser Wilhelm II, she shot a cigarette straight out of his mouth.

Nothing could stop Annie, not even injury. In 1901, she was partially paralyzed from a railroad accident, but recovered and still choose to keep performing. She was one of the Wild West Show’s top-earning performers, and had no qualms about sharing her wealth with her family and donating it to children in need. She even helped raise money for the Red Cross. 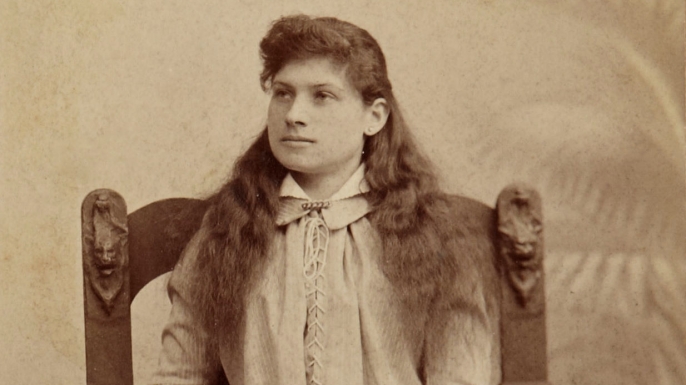 Even after retirement, Annie continued to work . She kept hunting, fishing, and even taught marksmanship to other woman right up until her death. She was a firm believer that women should spend time outside in the fresh air doing things they loved, not just cooped up inside.

After a long life of badassery, activism, and crazy skill with a rifle, Annie finally died on November 3, 1926, in Greenville, Ohio. Her husband died on the 21st of November of the same year. News of her death spread throughout the world and saddened the entire United States.

Her legacy still lasts to this day. Since her death, there’s been a musical, two films, and a variety of books made about her life story. She still remains a lasting icon of female empowerment today.

“Aim at a high mark and you will hit it. No, not the first time, not the second time and maybe not the third. But keep on aiming and keep on shooting for only practice will make you perfect. Finally you’ll hit the bull’s-eye of success.” – Annie Oakley.