The History of Broadway

Broadway, or Broadway theatre, is theatre performances in New York in the 41 professional theatres that have 500 or more seats located along Broadway. Broadway theatres are located in the Theater District and lincoln Center in New York and are popular tourist attractions. Most shows today on Broadway are musicals with some plays. Theatre first became popular and present in New York in 1750 and is still going on to this day.

Walter Murray and Thomas Keane, actor-managers, established the first significant theatre in New York in 1750. They established a resident theatre company at a theatre on Nassau Street that held approximately 280 people. Shakespeare plays and ballad operas like The Beggar’s Opera were presented at the theatre. William Hallam sent a company of twelve British actors to the colonies along with his brother Lewis, who was also his manager, two years later in 1752. In Williamsburg, Virginia, they established a theatre,  opening with The Merchant of Venice and The Anatomist. The following summer in 1753, the company moved from Williamsburg to New York, where they performed ballad operas and ballad-farces. 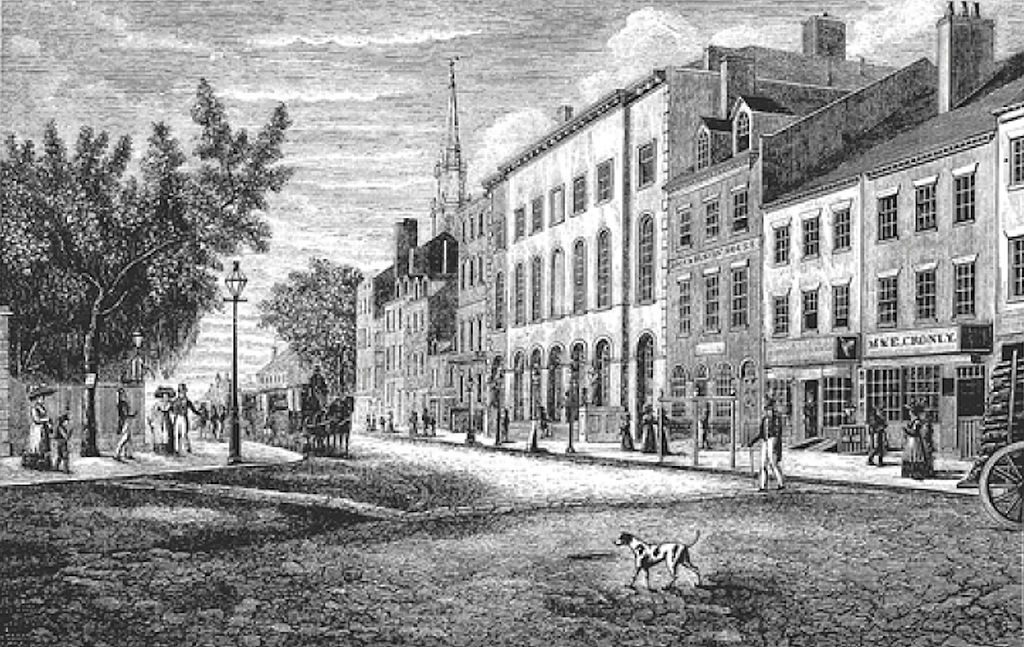 Upon the start of the American Revolutionary war in 1775, theatre in New York was suspended, but resumed in 1798. That same year, Park Theatre was built on Chatham Street (now Park Row). Park Theatre had 2,000 seats, much more than the previous theatres. And later on in 1826, the Bowery Theatre was opened with many more to follow. In the 1830s, the American entertainment form blackface minstrel shows became popular, and even more so in the 1840s with the arrival of the Virginia Minstrels.

When Niblo’s Garden, a Broadway theatre on Broadway and Prince Street, opened in 1829, it quickly became a premiere nightspot in New York. It had 3,000 seats and presented all sorts of entertainment, including musicals. An entertainment complex was being operated by P.T. Barnum in lower Manhattan by the 1840s as well. Palmo’s Opera House opened in 1844. However, it was only open and presented operas for four seasons then had to rebrand as a play venue due to bankruptcy. Palmo’s Opera House then became known as Burton’s Theatre. In 1847, the Astor Opera house opened. When lower class Broadway patrons objected to what they had perceived as being snobbery by the upper class in the audiences at Astor place, a riot broke out in 1849.

William Shakespeare’s plays were presented frequently during this period on Broadway. Edwin Booth was a notable American actor who had gained a worldwide reputation for his performances in Hamlet as the title role. He famously played the role for 100 consecutive performances in 1865 at the Winter Garden Theatre. Edwin Booth also happened to be the brother of President Abraham Lincoln’s killer, John Wilkes Booth. Later on, Edwin Booth reprised the role at his own theatre called Booth’s Theatre. Fanny Davenport, Charles Fechter, Henry Irving, and Tommaso Salvini had also become notable Shakespearean performers in New York.

In 1868 Lydia Thompson came to America at the head of a small theatrical troupe. They adapted popular burlesques from England for middle-class audiences in New York. Her troupe became known as the “British Blondes” and during the 1868-69 season, was the most popular show.

Around 1850, seeking more inexpensive real estate in New York, moved from downtown to midtown. By 1870, Union Square was the heart of Broadway. And then by the end of the nineteenth century most theatres were located near Madison Square. Not until the early twentieth century did theatres find their way to Times Square.

The first “long-run” musical on Broadway was The Elves, which was presented in 1857 and ran for fifty shows. Musical runs in New York noticeably lagged behind musicals in London’s West End. New York records were shattered when Laura Keene debuted her “musical burletta” in 1860 called The Seven Sisters. The show ran for a total of 253 performances.

The Black Crook is considered to be the first piece of theatre that set the stage for the modern musical when it debuted on September 12, 1866 in New York. The show ran for fave and a half hours and had a record breaking 474 performances. In 1866, the first show to be called a musical comedy was The Black Domino/Between You, Me, and the Post.

In 1881, the first vaudeville theatre was opened just east of Union Square by Tony Pastor. There, Lillian Russell, prominent American actress and singer, performed. Edward Harrigan and Tony Hart, two comedians, produced and starred in their own musicals from 1878-90. Their show The Mulligan Guard Picnic featured a book and lyrics by Harrigan and his father-in-law, David Braham, did the music. Their musical comedies were about characters and their everyday lives as lower class New Yorkers. They represented significant steps from the popular vaudeville and burlesque to a more literate form of theatre. Instead of women of more questionable repute from earlier forms of musicals, Harrigan and Hart’s musicals starred high quality signers like Lillian Russell, Vivienne Segal, and Fay Templeton.

The number of potential theatre patrons grew immensely as transportation in New York improved, poverty diminished, and street lighting made for safer night travel. Plays were then able to run longer and draw in large audiences. This led to better profits and improved values in production. Much like what was happening in England, theatre was becoming more clean with less prostitution. Gilbert and Sullivan created family-friendly comic operas that were hits in London and were soon brought to America. In 1878, they began with H.M.S. Pinafore. American productions like Robin Hood  in 1891 and El Capitan in 1896 were imitations of Gilbert and Sullivan’s works.

Charley Hoyt took over the record of the longest running show when A Trip to Chinatown came out in 1891. The show ran for a total of 657 performances! Not until 1919 was this record surpassed either with Irene. Five years later in 1896, the Theatrical Syndicate was formed by two theatre owners, Marc Klaw and A. L. Erlanger. The Theatrical Syndicate was in control of nearly every legitimate theatre located in the United States for sixteen years to come. Small vaudeville and variety houses continued to be profitable and Off-Broadway had been established by the end of the 19th century too.

The first musical comedy that was entirely produced and performed by African Americans on Broadway was A Trip to Coontown in 1998. Clorindy: The Origin of the Cakewalk in 1898 and In Dahomey in 1902 followed. The latter was extremely successful. In the early 1890s and 1900s many musical comedies began showing up on Broadway from composers such as John Walter Bratton, George M. Cohan, Gus Edwards, and more. New York Broadway runs continued to be short for the most part, unlike in London. British musicals were also extremely successful in New York.

In the early 1900s, translations of popular operettas and the “Princess Theatre” shows were popular. Broadway shows also began to install electric signs outside the theatres, starting with The Red Mill (1906). colored bulbs burned out too fast, so they used white lights instead. Thus, Broadway was given the nickname “The Great White Way”.

The Actors’ Equity Association demanded a standard contract for all professional products in August of 1919 and went on strike. Due to the estrick, all theatres were shut down and producers were forced to agree with them. And by the 1920s, the Shubert Brothers took over most of the theatres from the Erlanger syndicate. 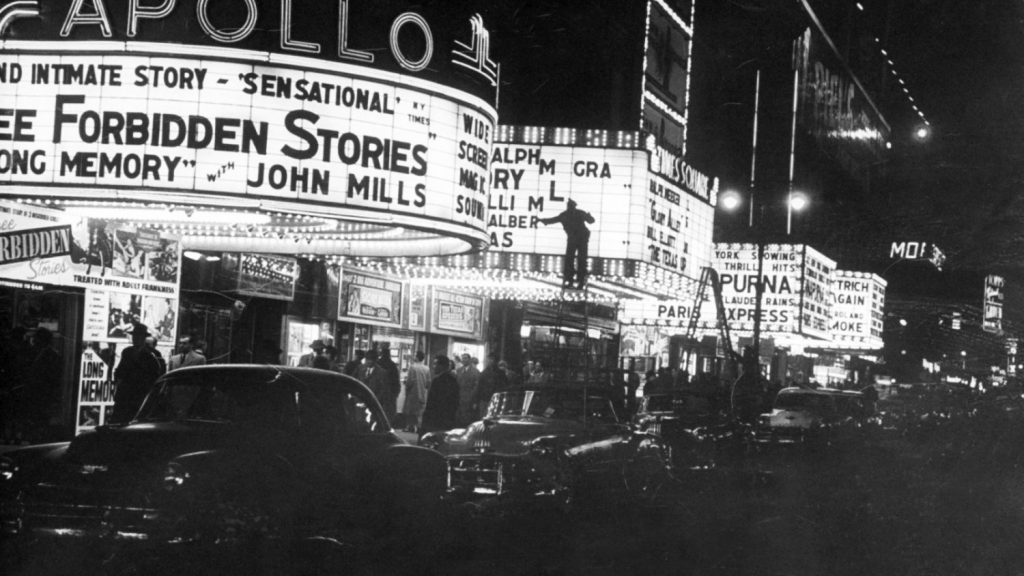 When the motion picture first debuted, it became a competition to stage performances. Originally they were only limited competition due to being silent, but by the 1920s as films had synchronized sound, they competed more and more with theatre. Some critics even wondered if cinema would altogether replace live theatre. Live vaudeville did out and could not compete with inexpensive films featuring vaudeville stars and other major comedians.

Musicals of the 1920s borrowed from vaudeville, musical hall, and other entertainment types and ignored plot to instead emphasize actors and actresses, dance routines, and popular songs. Annually, Florenz Ziegfeld produced song-and-dance reviews on Broadway that featured extravagant and elaborate sets and costumes. Many of the productions from the 1920s were lighthearted and included Funny Face, Harlem, Lady Be Good, Sally, and many more.

Show Boat premiered at the Ziegfeld Theatre on December 27, 1927, leaving behind the frivolous shows from earlier that decade. The musical had a book and score and was made up of dramatic themes told through music and dialogue, along with setting and movement. It ran for a total of 572 performances.

Eugene O’Neill proved that serious dramas on Broadway could be successful during the 20s with his plays Anna Christie, Beyond the Horizon, The Hairy Ape, Mourning Becomes Electra, and Strange Interlude. O’Neill’s great success on Broadway set the stage for other well known playwrights and dramatists such as Moss Hart and George S. Kaufman, among others.

Many Broadway dramas began to address the rise in Europe of Nazism as World War II was approaching. They also addressed America’s non-intervention. Lillian Hellman’s Watch on the Rhine opened in April of 1941 and was the most successful of these plays.

Broadway theatre had gone into a golden age when Oklahoma! premiered in 1943. The blockbuster musical ran for a total of 2,212 performances and was the first musical Richard Rodgers and Oscar Hammerstein II wrote together. The two of them went on to write many more successful musicals together.

A committee of the American Theatre Wing founded the Tony Awards in 1947. They named the awards after actress, director, co-founder of the American Theatre Wing, and producer Antoinette Perry who had passed away the year before. On April 6, 1947, the first awards ceremony was held at the New York City Waldorf Astoria hotel. The awards are still going on to this for Broadway productions and are considered to be the highest honor in the U.S. for theatre.

Producer and director Joe Papp, who had also established The Public Theater in New york, led the “Save the Theatres” campaign in the spring of 1982. The not-for-profit organization was created to save theater buildings from being demolished. It was also supported by the Actors Equity Union.

The 97th Congress introduced a bill called “H.R.6885, A bill to designate the Broadway/Times Square Theatre District in the City of New York as a national historic site” in July of 1982. Mayor Ed Koch’s Administration lobbied hard against the bill along with corporate Manhattan development interests. In the end, the bill was not passed.

Today, the longest running show on Broadway is Andrew Lloyd Webber’s The Phantom of the Opera, which began previews in early 1988 and opened at the end of January that year. On February 11, 2012, it became the first broadway musical to ever surpass 10,000 performances. And by November of 2016, the musical had been performed over 12,000 times in 28 years.