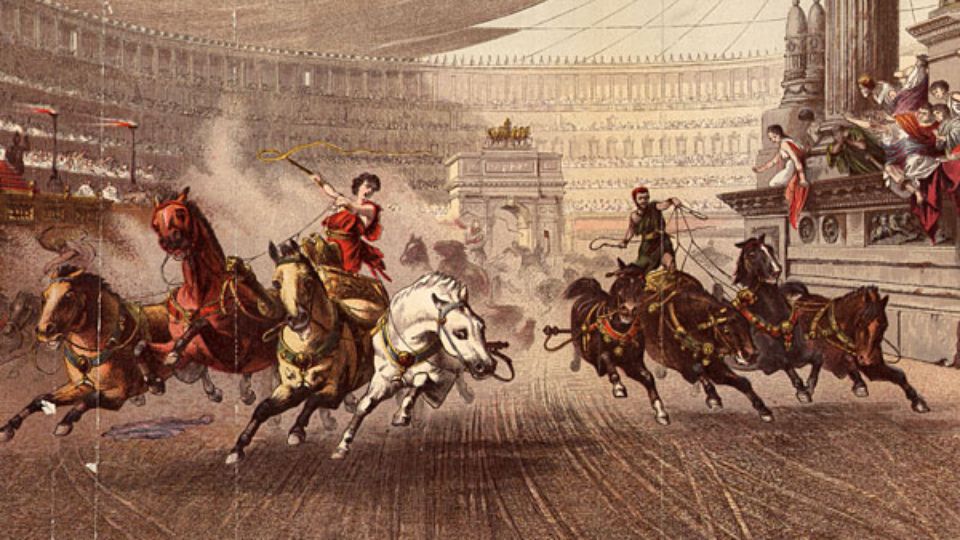 Rome was an empire obsessed with violence. Citizens went to fighting pits that stood like temples to war and blood to watch gladiators fight to the death, criminals and traitors be torn apart by wild animals, charioteers race at breakneck speed around dangerous curves, and even, occasionally, naval battles at the great Colosseum in Rome itself. One of the most popular sports in Rome was chariot racing. Everyone watched it, and even little boys played at it with tiny carts and pet ponies or goats.

Chariot racing was a blood sport. People came to watch racers die. Gambling at the races was at an all-time high. Poems were written about it. Charioteers wore team colors, representing different societal groups, and they even had their own fan clubs that cheered them on during the races. Different fan groups clashed in bloody fistfights and gang wars that often needed to be broken up by the authorities. One historian, Tacitus, reports that the crowds at a chariot race in Pompeii rioted. Beyond all that hype, charioteers have been the best paid athletes in history. Yep, they’re bigger than European soccer players, hockey players, and even American football players. One charioteer was reported to have won over $15 billion in prizes in today’s money. Races at the Circus Maximus were a big deal, bigger than the Super Bowl, bigger than NASCAR.

But, the Circus Maximus was not the only great chariot arena in the world at the time of the Roman Empire. On the north coast of Africa, one city rivaled Rome, they even came close to bringing her to her knees: Carthage, and the famous Circus of Carthage rivaled Rome’s Circus Maximus. The Circus of Carthage was, in fact, the second largest circus in Rome. It measured 77 meters wide, just 2 meters shy of the size of Rome’s Circus Maximus. The main difference seems to be in the seating capacity. Rome’s was much, much larger in that respect.

One thing has baffled archaeologists working on the site: how on earth did the Carthaginians race their horses in the blazing heat of Northern Africa without the animals fainting from heatstroke and dehydration? Well, it seems they may have found their answer.

The archaeologists discovered something very special at the spina: the middle strip of the circus. The area was often decorated with monuments and statues during the races. It was here that archaeologists found traces of water resistant mortar: a clever Roman invention.

“This kind of mortar is called hydraulic mortar. It’s a type of waterproof lime mortar mixed with crushed and pulverized ceramics that the Romans used in hydraulic engineering.” – Frerich Schön of Tübingen University

Ancient racetracks were equipped with water basins along the spina. Carthage was no exception. Researchers have pieced together that, here, Sparsores, or, sprinklers, would dip amphorae into these basins and throw water on the chariots as they passed by. The speed of the chariots, the spinning of the wheels, would create a cool water spray that would mist down the riders and horses as they went careening around the circus. It was, in fact, incredibly effective.

This was a ridiculously dangerous job, one most likely given to slaves. The sprinklers would have to stand in the circus, right at ground level in the action, and were always in danger of being run over and trampled by a runaway chariot.

This technique has been found to be common across many circuses around the ancient world. Archaeologists have found similar basins at the circus of Maxentius, just outside Rome. A mosaic from Carthage depicts the basins, the circus, and the spina.

Other excavations have been done on the Circus of Carthage to investigate the previous buildings and the spectator section. They hope that the investigation will provide information on the organization of the chariot games and just how important the games were to the urban topography of the city.

Over the next year, archaeologists will continue their work on the circus. It’s an incredibly valuable location- the only location in the area that’s been completely untouched by modern architecture. Who knows what they’ll find beneath the sand?

“It will be very interesting to reconstruct how the terrain was prepared for the erection of the circus, and what kind of usage dominated before.” – Dr. Ralf Brockmann