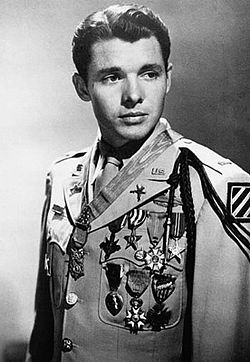 Last time on History’s Badasses, we covered the man who abolished the slave trade in the British Empire: William Wilberforce. This week, we have someone just a little bit different. He was a soldier, an actor, and one of the most decorated war veterans of World War II. He was basically a real life Captain America, and his name was Audie Murphy.

Audie Leon Murphy was born in Texas to a sharecropper family on June 20, 1925. His mother died when he was quite small, and his father abandoned them entirely. Audie was forced to leave school in fifth grade to pick cotton and find other work to help support his family just so that they wouldn’t starve. He grew up hunting to put food on the table, and turned into quite the sharpshooter with a hunting rifle. He always wanted to be a soldier, and, when the Japanese bombed Pearl Harbor in 1941, he tried to enlist, but literally everyone turned him down for being underaged and underweight. His sister forged a document for him, pushing his birthdate back a year so that he was old enough to enlist, and the US Army bought the ruse and enlisted him in 1942. During training, he received a badge for marksmanship.

He had an auspicious military career from the moment he was deployed into battle. In 1943, at Battipaglia, while on a scouting party, he and two other soldiers were ambushed by the Germans. One of his buddies was killed. He and the other survivor returned fire with a machine gun and a hand grenade, killing five Germans. Later the same year, in October, he and his company repelled a seven-soldier German attack, killing three soldiers and taking four prisoner. In 1944, however, he was struck with a bout of malaria and was hospitalized. Audie was right back in the action after he recovered, though, and on March 2nd, he and his crew killed the crew of a German tank. After that, he crawled up to the tank alone and destroyed it with fifty hand grenades.

The real badassery started later that same year, in 1944. In August, when Audie and his squad were deployed in southern France, he and his buddies were walking through a vineyard when they were attacked by German troops. Audie returned fire with a detached machine gun, killing two and wounding one. Two Germans left the house they were holed up in and pretended to surrender, but then shot and killed Audie’s best friend. Audie responded by advancing, under direct fire, to the house all by himself, taking it, killing six, wounding two, and taking eleven prisoner. He didn’t stop there. In September, Murphy crawled alone under the cover of night to the Germans stationed in the French city of L’Omet, directing his men to take the hill from a radio while the Germans were busy firing at him. By the time his men caught up with him, 15 Germans were dead, and 35 were wounded. Even when he lost part of his hip muscle to sniper fire and gangrene and was wounded in both his legs and awarded the Purple Heart for his service, Audie didn’t leave the military.

In December, it was decided that the Allies had to take the Colmer Pocket, a spot in the Vosges Mountains that had been under German control since 1944. During the assault, the Germans hit Audie’s tank, and his crew had to abandon ship. Audie ordered the men under his command to retreat and remained alone, directing artillery fire at the Germans through his radio and distracting the Germans enough so that they couldn’t find his men. In the midst of the fray, he climbed into the burning, abandoned tank, and took hold of the mounted machine gun. Audie returned fire on the German forces, wounding or killing about 50 enemy soldiers, and only stopped when he ran out of ammunition. He didn’t retreat. Instead, he called his men back and directed a counter-assault, repelling the Germans from the area. 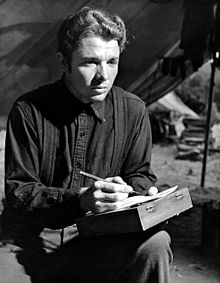 On February 16th, Murphy was promoted to First Lieutenant. The military pulled him off of the front lines and back into the Regimental Quarters and made him a liason officer. Audie L. Murphy received every military combat award available in the US Military, as well as French and Belgian awards for heroism. After the war, he struggled with PTSD. It wasn’t a recognized illness at the time, and he self-medicated with addictive sleeping pills and slept with a gun under his pillow. In his spare time, he found solace in writing poetry and breeding horses, and eventually he married Wanda Hendrix in 1949, and divorced her in 1951. He had a 21-year acting career after World War II, making over 40 films and a television series. Four years after his divorce, he remarried and had two sons.

On May 28, 1971, Audie Murphy was killed in a plane accident. On June 7 of the same year, he was buried with full military honors at Arlington National Cemetery. He was, arguably, one of the biggest war heroes of World War II, and certainly one of the most decorated American Veterans.

If you’re afraid of anything, why not take a chance and do the thing you fear? Sometimes, it’s the only way to ever get over being afraid. – Audie Leon Murphy