Dolley Madison: One of the Most Loved First Ladies

Dolley Payne Todd Madison remains one of the most notable First Ladies of the United States, her husband James Madison serving from March 4, 1809-March 4, 1817. With her social graces and presence, she was able to boost her husband’s popularity. Being the fourth First Lady, she set in stone the role that a president’s wife should play. She worked with many charities and organizations she believed in. Dolley also helped to furnish the White House when it was finished in the early 1800s.  In 1814, the British set fire to the White House, and Dolley heroically risked her life to save George Washington’s portrait. Married first to John Todd in 1790, he passed away three years later from a yellow fever epidemic, Dolley only twenty-five. She married James Madison the next year on September 15, 1794. Madison died in 1836, Dolley living in poverty for much of the remainder of her life until her death in 1849. 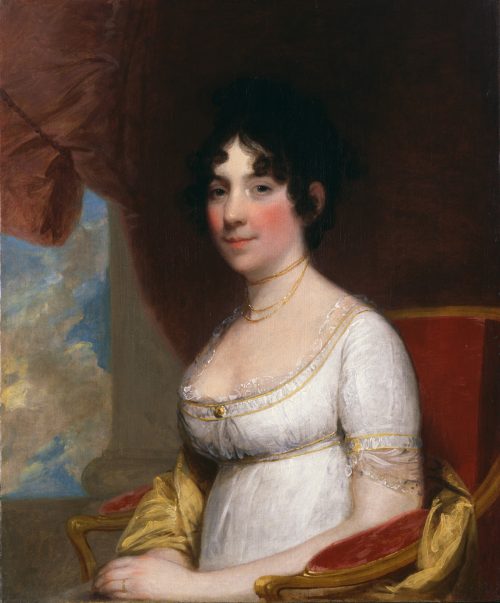 Mary Coles Payne and John Payne Jr. welcomed their first daughter on May 20, 1768, Dolley Payne, the future First Lady. The Payne’s were a Quaker family, Dolley having been born in New Garden, North Carolina, a Quaker settlement. Both Mary and John Payne had originally been from Virginia, but moved to North Carolina in 1765. While Mary Coles came from a Quaker family, though her husband was not. The two had married in 1761. John Payne did become a Quaker though a few years after their wedding, raising all of their children as Quakers. Together, they had eight children, Dolley being their fourth, four boys (Walter, William Temple, Isaac, and John) and four girls (Dolley, Lucy, Anna, and Mary) in all.

The Payne family moved back to Virginia in 1769, Dolley a year old. Their young daughter grew up comfortably, residing at a plantation in east Virginia her parents owned. Dolley became very close with her mother’s side of the family. By 1782, the last of the Payne children, John C. Payne, was born and Dolley had four brothers and three sisters. Dolley and her sister Anna stayed very close, Anna being her closest confidante.

After the Revolutionary War, John Payne, along with many other Upper Southern slave owner, emancipated his slaves in 1783. Dolley was fifteen years old at the time. John Payne soon moved his family out to Philadelphia where he became a starch merchant. The business failed in 1789, not even ten years later. He died in October of 1792. For some time, Mary Payne opened up their home to boarders, but then moved the next year to live with her second daughter Lucy and her husband, George Steptoe Washington with her youngest children Mary and John.

Dolley married John Todd on January 7, 1790. Todd was a Philadelphian Quaker lawyer. Together they lived at the corner of Fourth and Walnut Streets in a small three-story brick house. They quickly had two children, John Payne Todd (1792-1852) and William Temple Todd (1793), who died when he was three months old at the same time as his father. Anna Payne came to live with Dolley and John Todd in 1793 when their mother left for Virginia. Anna helped out with the children, and possibly with John Todd’s legal work. However, a yellow fever epidemic swept through Philadelphia in August of 1793. Over 5,019 people were killed in the span of four months, John Todd and their youngest son William included. Both of them died on October 24, 1793. So at only twenty-five, Dolley was widowed with a young son to take care of.

Most likely, Dolley Payne Todd encountered her future husband James Madison more than once while Philadelphia was the temporary capital from 1790-1800. The two were often in attendance of prominent social events in the city, so it was likely they had come across each other before. Aaron Burr introduced the two of them to each other. Burr and Madison had attended the College of New Jersey (Princeton University) and were good friends. Certain sources have even said that Dolley and Burr had stayed at the same boarding house for a while. So in May of 1794, he formally introduced Madison to the widow Dolley Payne Todd. Madison was forty-three, making him seventeen years older than Dolley, and still had yet to get married, which was uncommon for the time.

The two courted for a few months before she accepted his proposal for marriage that August, only having spent about three months together. Madison was not a Quaker, so Dolley, for marrying someone from outside her faith, was then expelled from the Society of Friends. On September 15, 1794, twenty-six year old Dolley Payne Todd married forty-three year old James Madison at Harewood, or what is now known as Jefferson County, West Virginia. For three years, the couple lived in Philadelphia. Together they had no children, though Madison adopted her son Payne. Their marriage was said to be a very happy one.

Madison retired from politics in 1797, having spent eight years as a prominent House of Representatives member from Virginia. With Dolley, he returned to the Madison family plantation, Montpelier, located in Orange County, Virginia. The couple expanded the already large estate before settling in. Three years later, they were interrupted when Thomas Jefferson, Madison’s closest friend, became President of the United States and requested Madison be his Secretary of State. Madison accepted the request and left Montpelier. Him and Dolley moved out to a large home in Washington with her son Payne and sister Anna, along with one of their domestic slaves. Dolley realized they would need to become frequent entertainers and hosts at the capital, hence why they took a larger house. 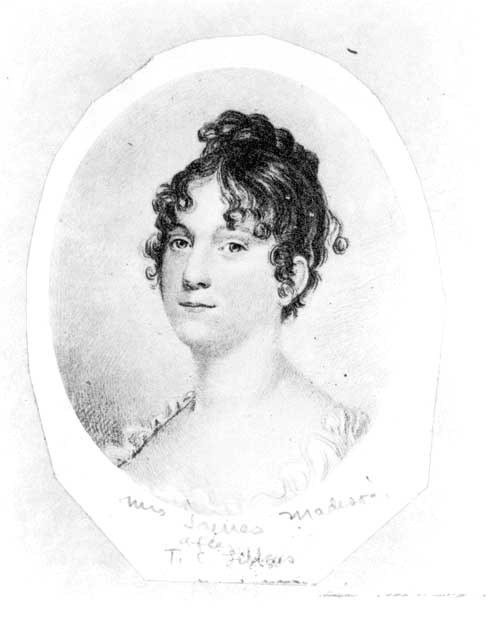 Architect Benjamin Henry Latrobe, who had been put in charge of designing Capitol Hill, worked with Dolley to furnish the White House. She also acted as First Lady for Jefferson at times during official ceremonial functions because his wife had died year before, though his daughter Martha Jefferson Randolph also took upon this role.

The Democratic-Republican party, which Madison had co-founded with Jefferson, nominated James Madison as Jefferson’s successor when his term came to a close in 1808. For two terms, Madison was President of the United States, serving from 1809 until 1817. Dolley was known to become the first official First Lady because of her role during her husband’s presidency. Well known for her hospitality and social graces, Dolley held many social events in the capital along with donating and helping different organizations and charities she felt strongly about. She was even able to boost Madison’s popularity because of her renowned kindness and reputation. He was re-elected in 1812 at the dawn of the War of 1812, which America fought against the British.

British forces quickly approached Washington on August 24, 1814, two years after the start of the war, when they were victorious at the Battle of Bladensburg. This marked the only time in United States history that a foreign force has occupied Washington, D.C. Dolley heroically ordered the copy Gilbert Stuart’s painting of George Washington to be removed as the White House staff quickly prepared to flee the city. It is unknown whether or not Dolley herself removed the painting, as popular accounts have suggested. There is a likely chance that slaves at the White House were the ones to actually remove the painting. Dolley quickly fled the city in an awaiting carriage, accompanied by other frantic families. She arrived first in Georgetown before crossing the Potomac and back into Virginia. When the British finally left Washington, D.C. a few days later, he returned to her husband, who had initially warned her of the oncoming British forces.

James and Dolley Madison arrived back at Montpelier a month after his presidential term ended on April 6, 1817. They lived a quiet life, Dolley having been happy to retire from public life and to spend more time with her husband. She managed the household and food cultivations by the saves and hosted occasional guests. With her husband, she began to prep releasing all the documents and notes he had taken when the U.S. Constitution had been drafted in 1787. When Dolley’s son Payne went to debtors’ prison in 1830, though never once having had a single job, her and Madison had to sell land in Kentucky along with mortgaging half of their plantation so his debts would be paid off.

On June 28, 1836, James Madison, aged eighty-five, died at Montpelier and was buried in Montpelier’s Madison Family Cemetery. He was the last of the Founding Fathers to die.

For a year, Dolley remained at the estate, her niece Anna Payne moved in with her, and her son also spent quite a lot of time at the estate. She finished organizing and copying Madison’s papers. Congress gave her $55,000 for editing and publishing seven different volumes of Madison’s papers, especially his Constitutional Convention notes.

During fall of 1837, Dolley returned once more to the capital city, putting her son in charge of Montpelier. Her sister Anna and her husband, Richard Cutts, had purchased a house in which Dolley moved into with her niece Anna locate don Lafayette Square. But because of his alcoholism and illnesses related to his addiction, Payne Todd was unable to manage the estate as his mother lived in Washington. She tried to sell more of her husband’s papers for money, selling her butler and slave Paul Jennings to Daniel Webster as well. Dolley could not find anyone to purchase the papers and was instead forced to sell Montpelier for money to pay off debt, the slaves and furniture included. She permanently moved to Washington in 1844.

While in Washington, she lived in her husband’s former home across from the White House, living in poverty with hardly any money and outstanding debt. Luckily, Dolley sold the rest of her husband’s papers to Congress in 1848 for about $22,000-$25,000. Congress awarded her an honorary seat, the First Lady to have this honor, which allowed Dolley to watch Congress from the floor. She also became the first American citizen to transport a telegraph message. Inventor Samuel F. B. Morse had given her this honor. Dolley stayed in the public eye during her time in the capital, seen as one of the last living connections to the Founding Fathers, as all of them had passed away at that point. She remained a closer advisor to First Ladies Julia Tyler and Sarah Polk. Dolley joined with Elizabeth Schuyler Hamilton, the widow of Alexander Hamilton, on July 4, 1848 to raise funds for the Washington Monument. John Quincy Adams’s widow, Louisa Adams, also assisted them in setting up a women’s committee to raise the funds. Though their husbands had become enemies after the U.S. Constitution was signed, Dolley and Eliza became close friends in Washington, having also known each other from when their husbands collaborated on the Federalist Papers.

On July 12, 1849, eighty-one year old Dolley Payne Todd Madison died in Washington, D.C. Originally, Dolley was buried in the capital at the Congressional Cemetery. Late ron, she was re-interred at the Montpelier cemetery beside her husband.