History is full of interesting anecdotes. A lot of those stories come from the insane, off-the-wall things that some nutcase did 2000 years ago. There’s stories about emperors who thought they were god incarnate, kings who thought they were too, queens who covered their faces with lead paint in order to look beautiful and poets who drank from skull cups and lived in complete darkness. There were princes who fancied themselves to be ninjas (no, really), and a baroness who believed that bathing in the blood of virgins really would make her more immortal. We’ll cover them all eventually, and more besides!

Today’s nutcase is a long-dead Roman Emperor, one you’ve probably heard of, one who’s quite famous for being a tad insane. His name was Gaius Julius Caesar Augustus Germanicus, better known as Caligula.

Caligula, as we’ll call him, was born on the 31 of August in AD 12. He was the little brother to the also famous Nero, and nephew to Emperor Tiberius. Augustus Caesar was his great-grandfather. Caligula gets his famous nickname from a time when he was about two or three and traveled with his father, Germanicus, on his wars. Little Caligula wore a tiny replica of a soldier’s outfit to the great amusement of the legions, and so the soldiers gave him his nickname: Caligula, which really means ‘little boots’, or, more affectionately: bootsie. Yes. That’s right. One of the craziest, most bloodthirsty emperors in all of Roman history, and we know him best as the Latin version of bootsie! 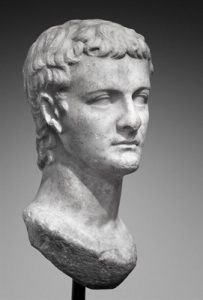 Caligula became emperor after his uncle, Tiberius, died in AD 37. For a while, he did pretty good. At the beginning, he was a well-admired emperor. According to Suetonius, over 160,000 animals were sacrificed in honor of his reign, and according to another record, the first seven months of Caligula’s rule were absolute bliss. Then, October rolled around, and the Emperor fell deathly ill. He survived, but something had changed, and everything went dramatically downhill from there. Somewhere in that illness in October, AD 37, Emperor Bootsie went completely mad. The next year, in AD 38, he executed many people without full trials, and, for some unknown reason forced his supporter Macro to commit suicide.

By AD 40, it’s clear Caligula’s brain was gone. He’d had a feud with the Roman senate, and, during the conquest of Britannia, he tried to declare war on Neptune, as in, the god of the sea. Nobody was sure how he planned to wage war on the ocean, exactly, but whatever. He’s the Emperor, right? Oh, and not only that, Caligula thought he was god incarnate. He began to refer to himself as god in meetings with senators and politicians, and was even referred to as Jupiter during public speaking events. Caligula demanded that temples be erected in Rome in his honor, and he removed the heads of divine statues and replaced them with his own. During his demanded worship, he told everyone to call him “Neos Helios”, or “New Sun”.

On top of all of that, he started to do some downright stupid and diabolical things. Sources like Philo of Alexandria and Seneca the Younger accused him of sleeping with other men’s wives and bragging about it. He killed for sport. One time, when Caligula was bored to tears, he had a good portion of a crowd thrown into the arena to be killed by wild animals. Other sources accused Caligula of incest with his sisters and of prostituting his several wives out to other men. He turned an entire palace into a brothel, and, as the final shreds of his sanity melted away out his ears, he tried to get his horse elected senator.

It’s no surprise, then, that in 40 AD, that Caligula decided he was going to pack up and move to Alexandria to be worshiped as a living god. Roman Senate didn’t take too kindly to this. And, in AD 41, Caligula was stabbed to death by his own senators, almost exactly like Julius Caesar had been. His personal guard didn’t get there fast enough to save the emperor’s life. In this case, history did, indeed, repeat itself. Claudius became emperor after him, and everyone who was suspected to be involved in Caligula’s assassination was executed. Thus ended the reign of one of Rome’s most notorious emperors.